A Story and Song…How I Got Started 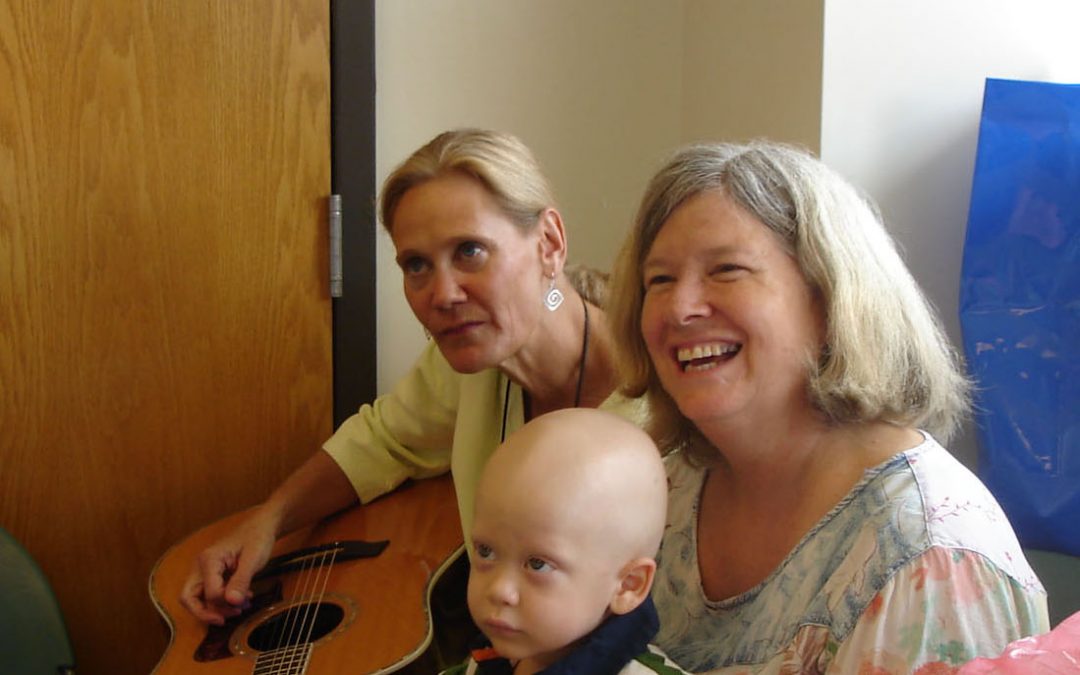 As is the case with many of my most valuable life experiences, I was dragged into Shands Arts in Medicine (AIM) at the University of Florida, kicking and screaming. If you had told me sixteen years ago that I would be playing music in the hospital on a regular basis, I would have said “No way!”  Hospitals have never appealed to me. In fact, I used to faint when I got my blood drawn. But I was intrigued by the AIM program, where I live, in Gainesville. As soon as I heard about it, long before becoming an artist in residence, I knew these were good people, doing a great thing.

I remember playing at a restaurant twenty-something years ago. I was doing dinner music, and I had my little baby boy with me in an infant carrier seat up on the bar. A woman came up to me at the end of the set and she had tears in her eyes. “Your music made me feel so much better,” she told me. “I’m staying at Ronald McDonald House and my son has to get a bone marrow transplant.” At the time I had no idea what she was even talking about. But I knew it was no ordinary encounter. Actually, it was a preview of things to come. I now play on the bone marrow transplant unit once a week.

BUT–it wasn’t always easy! It took me two years of roaming around the fringes of AIM and telling other people what great work they did, before I finally got the courage to walk through that door myself.  One of the artists, Peg, finally talked me into coming onto a unit to do some concerts in the evening. I started out on the pediatric oncology unit, bringing my friend and musical partner Janet to play a concert with me in the family room/gathering area. She would bring her banjo, and I would play guitar.

Peg was roaming around the unit gathering patients to come into the family room where Janet and I were setting up to play. She reported back that one little girl she was hoping to bring had been too sick to come, but her sister L. was at the concert. As we began playing, the L’s eyes got wide and her face lit up. She grabbed Peg by the hand and said “We’ve GOT to go get Sissy! She needs to hear this!” They left the room and Peg accompanied her to her sister’s room, where they and the Mom coaxed the little sister into a wagon and started pulling her down the hall. She moaned and fretted, still in pain.

But her sister kept encouraging her.

“Hear the music, Sissy?” she cooed. “Listen to the banjo!”

And as she got closer to the music she began to sit up straighter. As the sounds of the banjo rang out into the hall, she began to smile and sway. By the time she got into the family room she was bobbing and dancing in the wagon! Her pain, at least for the time being, was forgotten. She and her sister and mom stayed and enjoyed the music, and the evening turned into a birthday celebration for Peg, which became even more festive as it turned out that one of the patients was having a birthday too.

There’s nothing quite like a group of kids in hospital gowns dancing with their IV poles and singing Happy Birthday, accompanied by the banjo.

And that’s how it all started for me.

I feel truly blessed to be able to play music for people in this kind of setting, where the effect it has is so positive and immediate. I’m sure many of you have experienced the power of gratitude. There’s a song I wrote that helps me remember to be grateful every day. If you’d like to hear it, click the following link: